{Blog Cruise} What Makes One a "Large Family?"

This week's Schoolhouse Review Crew Blog Cruise is focusing on large family homeschooling. So when does a family become a "large family" exactly? I certainly don't feel I'm one with only three children. Although, sometimes by the world's standards we fit that category.

I'm unable to make hotel reservations online and have all of us stay in one room. The "max" is four people and we have five. Most discounts include "two parents and two children"...we have three. Needless to say it can be a bit frustrating, but I'm sure those with more children find it even more so. 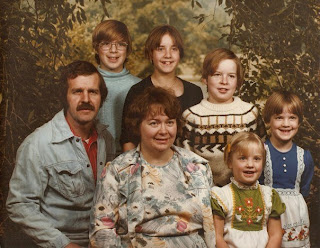 I'm the one in the blue & white dress.

I never thought how difficult it might be to have more than two or three children. I actually grew up in a "large"  family. I am one of five siblings. I have three older (two brothers and a sister) and one younger sister. There is a ten year age span between my younger sister and my oldest brother. My mom was a stay-at-home mom, but this was before the homeschool movement became main-stream so we all attended public school.

When I was in fourth grade, my oldest brother graduated from high school and went off to the Navy. He was essentially gone from my life at that point as he was soon married when I was only in about sixth grade - he was stationed in Alaska at the time and that was where the wedding took place. Needless to say it wasn't in the budget for all of us to attend.

My older sister is five years older and we were never really friends growing up. She was thrust in to the roll of caregiver for her two baby sisters and wasn't always happy about it. However, we are now best friends and that came as we were adults. I spend a lot of time with her and we have a fantastic relationship. 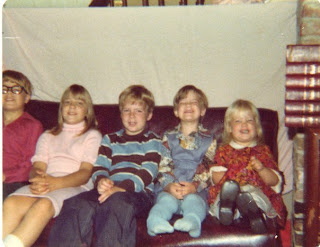 When I was married and began thinking about having a family, I decided that I would have all of my children before I turned 30 and that they would be close in age so that they would all "get along" well. I also was hoping to have them while I was young so I could "enjoy my older years" once they were gone. I'm sure God laughed about all this.

I had my life planned out and then things began to change. I started homeschooling my oldest son at age five. I saw so many homeschooling families who had children, many children, who all got along well and enjoyed spending time together. I thought that things might be a bit different.

Then I began babysitting. In fact, we like to blame the first child I babysat on the fact that our youngest arrived on the scene. I realized that once I was a SAHM, more children weren't all that much harder. It doesn't get exponentially harder with each child. Those that have many children will tell you that it actually gets easier and it's true. The older ones can help do chores and help with younger siblings. The children entertain each other and play together.

Once we moved back to the family farm eight years ago I began babysitting two little girls and soon found myself with five children each day. I didn't let that stop our activities. I took those two little ones with us everywhere. I learned that a large family wasn't harder - busier for sure - but not harder. My boys were excellent helpers with the two little ones. They learned many useful skills - such as empathy and helping and sharing.

As a result of our homeschooling lifestyle we spent a lot of time together - my boys and I - and I soon discovered something. My boys liked each other. My oldest son, even though there is a four and a half year age span between him and his brother, get along well, play together, and have a great relationship. My two younger sons (not quite three years apart) are best friends. This comes in part from shared interests and a shared bedroom. 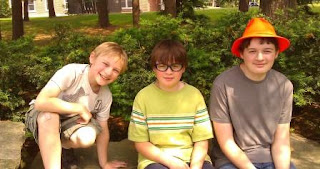 At this point we have no plans to add more children to our family, but if the opportunity ever presented itself, I know that having more children would not be overwhelming - most days. I love that my boys have such great relationships with each other and if more siblings arrived, I'm sure they would love them all greatly.

While three children doesn't really qualify me for a "large family" label, there are other Schoolhouse Crew Members who more than meet that qualification. So be sure to check out the Blog Cruise that will go live on Tuesday (8/14) with links to their posts.